Will you cut your turkey intake on Thanksgiving? Minnesota producers brace for the answer

Minnesota is the largest turkey producing state in the nation, and that means a lot rides on an uncertain 2020 holiday. 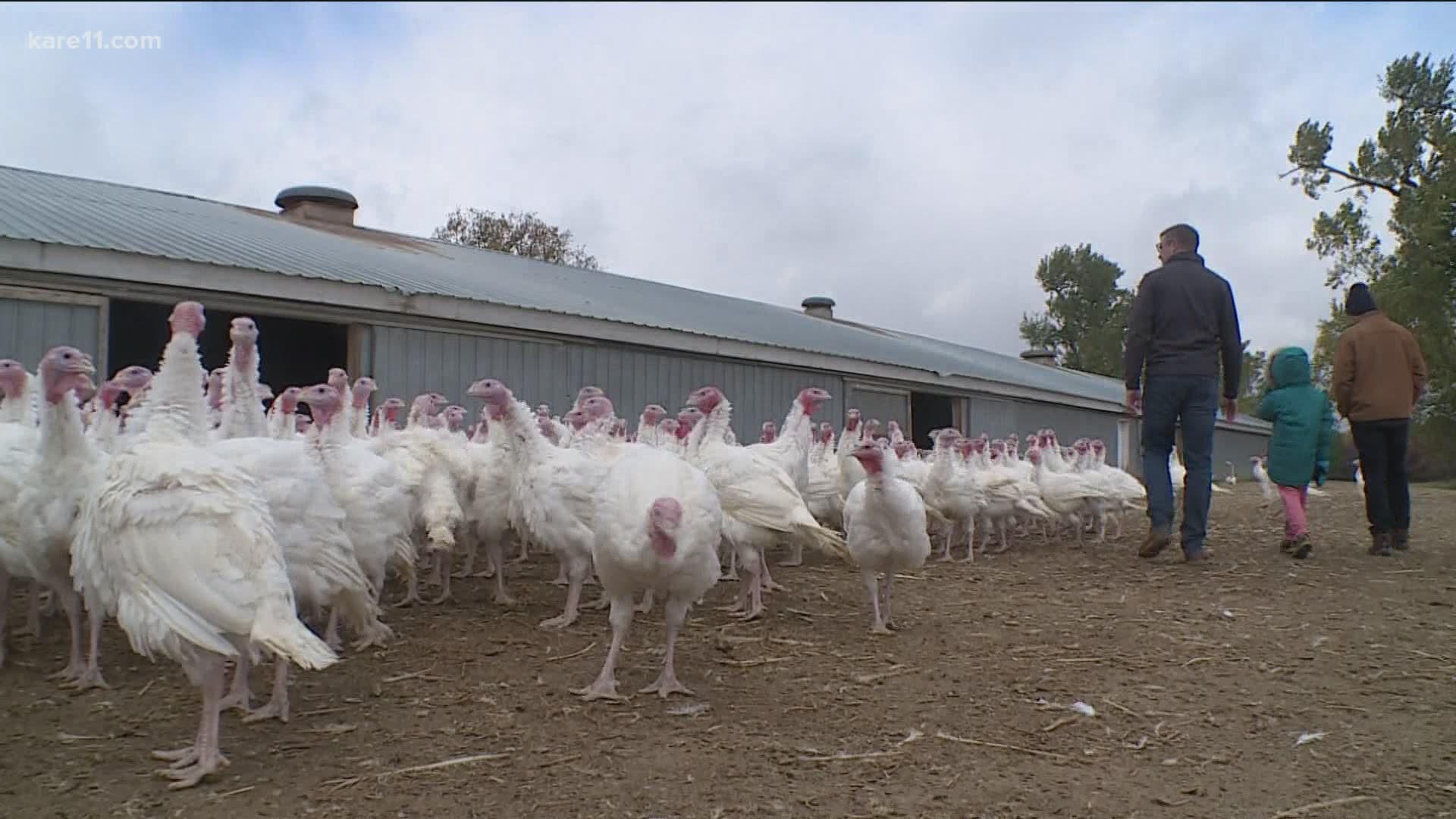 CANNON FALLS, Minnesota — Thanksgiving is still six weeks away but new warnings about family gatherings in the midst of the pandemic, are adding even more uncertainty to a holiday that Minnesota turkey producers are really counting on.

Thanksgiving turkey consumption is always a big deal for Peterson, who is a third generation owner of his family turkey farm.

"In a typical year about a third of our sales happen during this, what we call the Thanksgiving window," Peterson said. "This year Thanksgiving is, in a lot of ways, more important than ever because of so much of the restaurant and food service business that hasn't happened."

Peterson, who is also the President of the Minnesota Turkey Research and Promotion Council, recently spoke to the New York Times about how producers of all sizes have a lot at stake right now.

"On our farm we have about 40,000 turkeys, which always sounds like a really big number but Minnesota is the largest turkey growing state in the country," Peterson said. "In a calendar year Minnesota will grow about 45 million turkeys in a year."

And as those producers approach the most important date on their calendar, Peterson says they are all trying to do their best to meet the demands of an unprecedented year.

"We're hearing from a lot of our grocery customers that they expect people will be having smaller gatherings and will be needing smaller turkeys or maybe turkey parts rather than a whole turkey," Peterson said. "But it's hard to shift very quickly. We were actually all in on Thanksgiving 2020 way back in 2019. We had to start ordering our Poults, our baby Turkeys and plan out a schedule."

Though it can't instantly change the size of its birds, Ferndale Market has been able to market directly to consumers and is preparing a drive-through market for fast Thanksgiving pick ups.

"I don't think we have too much fear that the tradition is going to change," Peterson said. "One really promising thing that we're seeing is that we're actually seeing more people advance buying their turkey. We've actually seen much more early demand for Thanksgiving turkeys than in a typical year and some of that may be that I think people have maintained more of a stock up, prepare kind of mentality."

But don't worry, he says he doesn't think stores in Minnesota will be running out of turkey any time soon.

RELATED: The Get Down Coffee Co.: Bolstering business, community and specialty coffee in North Minneapolis