Nathan Prigge plans to attend Bethel University this fall, and one day hopes to go into aeronautic engineering. 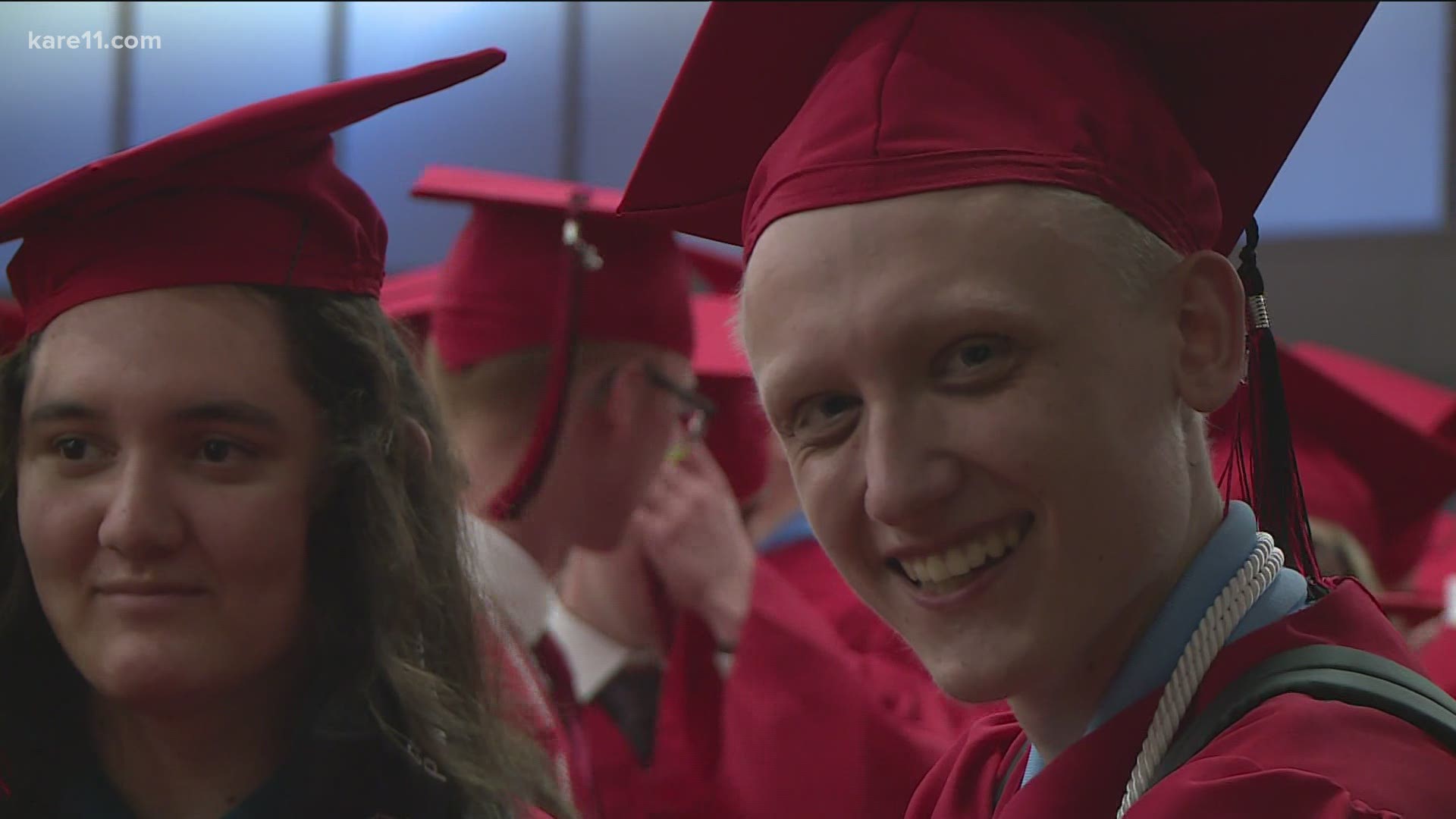 ST PAUL, Minn. — In a season filled with commencement ceremonies, the graduation of one Stillwater High School student simply stands out.

If for no other reason than Nathan Prigge is standing, walking and reaching the milestone despite a difficult journey the last few years.

“Some people might look at me and say, ‘Wow, you’re really, really unlucky, having to go through all that. And they might be right, but I want to make the best of it that I can,’” Nathan said moments before he walked into St. Paul’s Roy Wilkins Auditorium, where Stillwater held their commencement ceremony on Saturday night.

Minutes later, Prigge walked across the stage to receive his diploma. The achievement marked a milestone in a journey that started just a few years ago.

Back in August 2018, Nathan started noticing pain “along the left side of his rib cage,” according to his CaringBridge website. Several scans, surgeries and treatments later, the family learned his diagnosis: osteosarcoma.

“Osteosarcoma is often referred to as the beast because it is a brutal, brutal cancer to fight,” said Nathan’s mom, Robin.

But fight, Nathan did, including surgeries to remove some of his ribs and part of his spine. He’s undergone chemotherapy and is currently talking to doctors at the Mayo Medical Clinic about possible thermal ablation of a new tumor growing around his spine.

“We’re just going to keep fighting. Odds aren’t always in these kids’ favors, but we’re going to fight and give it all we’ve got,” Robin said.

Inspiration from another Stillwater Star

And when it comes to both fighting and inspiring, Nathan can look to yet another Stillwater student: Zach Sobiech.

“I remember myself sitting in elementary school class and we were watching a video about Zach Sobiech,” Nathan said about the Lakeland teenager who died of osteosarcoma in May 2013, but not before penning his famous song, “Clouds.”

“He’s been an inspiration,” Nathan said about Zach, adding, “The fact he didn’t sulk or anything, he actually did something.”

And Nathan has been “doing something,” too. Boosted by a GoFundMe fundraiser started by his supportive community, Nate has been able to take a trip to Colorado and rode in a World War II trainer aircraft on Memorial Day.

And then there’s his graduation. Along with his cap and gown, Nathan wore a backpack containing his latest chemotherapy medication.

This fall, Nathan plans to attend Bethel University. He one day hopes to go into aeronautic engineering. Milestones he hopes to reach with the support of his family, his community, his own fighting spirit.

“Make the best out of what you’ve got, that’s what I say,” Nathan said.

“We all should be living like time is short,” Robin noted, adding, “Nate has such a positive spirit and more grit than I probably ever gave him credit for before.”

The Prigge family notes they remain absolutely grateful for the support of their community, with Robin saying, "This has been a really hard journey, but it's not a lonely one. We’ve never been alone, we’ve always had support."

To learn how you can support Nathan during this difficult time by even helping him travel to places he’d love to see, just go here.

And for more information on how you can support osteosarcoma research, just go here.