State troopers and members of the National Guard could be seen around the Minnesota State Capitol complex. 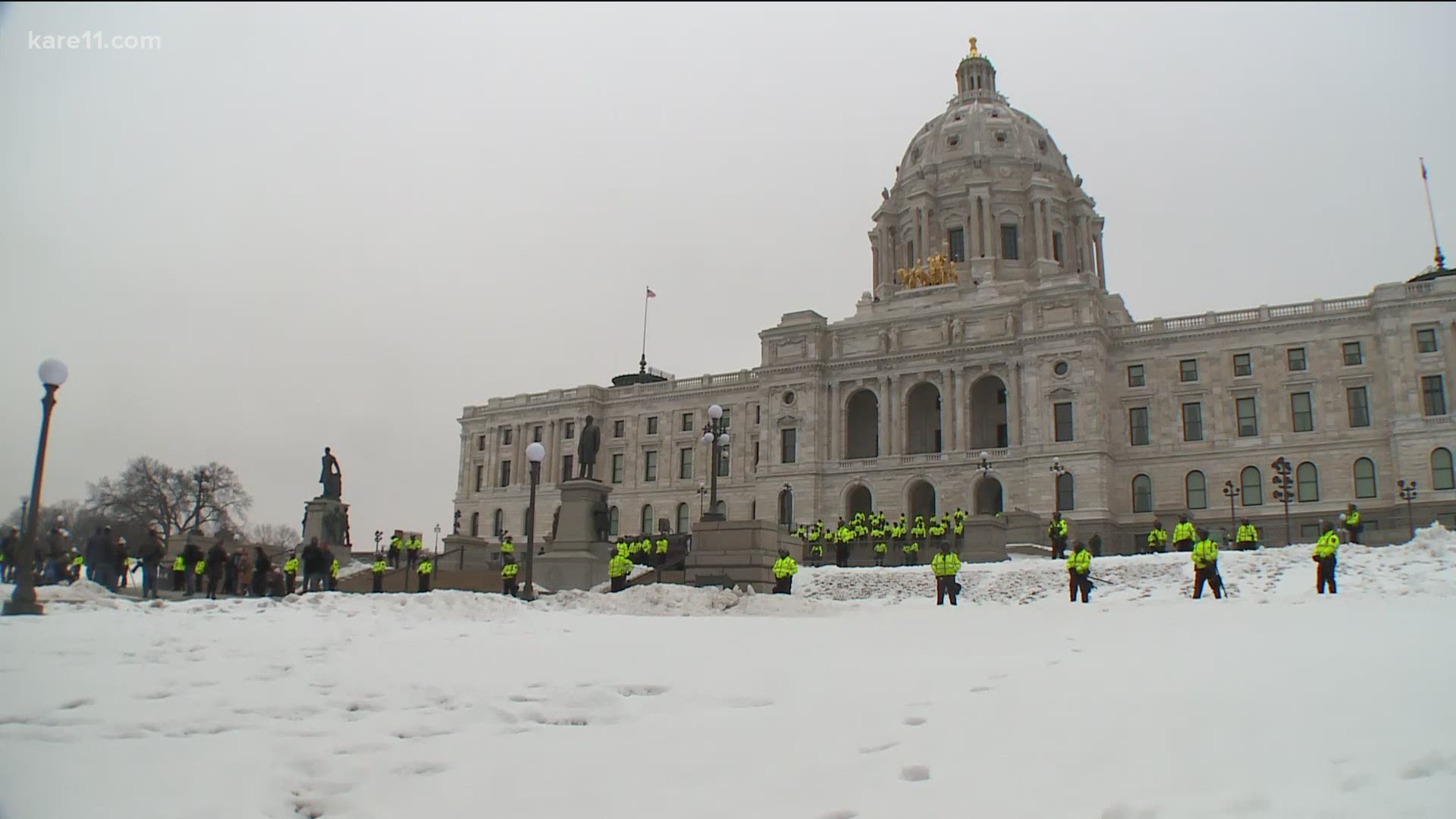 Sunday's event at the Minnesota Capitol began even smaller than Saturday's protest, with only a handful of attendees. Two counter protesters were also briefly present. Security presence at the building remained heavy, with law enforcement officers significantly outnumbering protesters.

Held by the same group as Saturday's protest, Sunday's event was described by organizers on Facebook as an "informal worship service to pray for our President, fellow Americans and elected leaders."

The photos below are from Saturday's protest.

A small group of under 50 protesters at the Minnesota Capitol mostly left the area by around 1:30 p.m.

This particular group often protests on the weekends against COVID-19 restrictions and the outcome of the 2020 presidential election, echoing unproven claims of fraud.

Protesters we spoke with said they wanted to distance themselves from last week's violence at the U.S. Capitol.

"We're just here to, you know, show all you guys that hey nobody's violent and sometimes it's only two of us or five of us ... sometimes it's 100, but we're not ever violent," said one protester.

The group, some of whom held pro-Trump signs or flags, was greatly outnumbered by the Capitol's heavy law enforcement presence. Minnesota State Patrol told KARE 11's Danny Spewak that no arrests were made.

A handful of counter demonstrators were seen around the Capitol grounds, but no noteworthy interactions occurred between the two parties.

A visible security presence could be seen around the Minnesota State Capitol complex on Saturday, even as state leaders assured Minnesotans there are "no credible threats" to the area.

The building was surrounded by various members of law enforcement. An armored vehicle was also present as part of traffic blockages around the Capitol.

The Minnesota State Capitol is surrounded by law enforcement, with various troopers and officers guarding the front steps and perimeter. Here’s a look: @kare11 pic.twitter.com/c5e20Ff4kF

Troopers from the Minnesota State Patrol and members of the Minnesota National Guard are among those providing additional security this weekend. The security measures were put into place following reports that the FBI was monitoring potential threats to state capitols nationwide ahead of next week's inauguration in Washington, D.C.

Minnesota Department of Public Safety (DPS) Commissioner John Harrington said Friday that neither the FBI, Department of Homeland Security or BCA have found any credible local threats at this time.

Harrington said Friday that he and other law enforcement leaders support the rights of people to exercise their First Amendment rights to protest. He added that for everyone who wants to come to the Capitol and have their voice heard, law enforcement will protect them; but he said they will be there to stop anyone with a different agenda.

Vehicle traffic is currently limited around the State Capitol, though foot traffic is still allowed.

At least one permitted event was expected on the Capitol grounds on Saturday, which organizers described in social media posts as "a low-key version of our regularly scheduled peaceful Saturday protest."

Although law enforcement says there are no direct or recent threats to the Minnesota State Capitol, an armored vehicle and State Patrol squad car are keeping watch. They’ve blocked traffic near the capitol complex. @kare11 pic.twitter.com/UkWui7jN84

State leaders said there were "no credible threats" to the Minnesota State Capitol as officials gave an update Friday on security measures leading up to Inauguration Day.

The news conference followed the insurrection at the U.S. Capitol last week, and reports of potential threats to state capitols that are being monitored by the FBI and law enforcement nationwide.

"To be very clear with Minnesotans, we take the threats to our Capitol and to our citizens very seriously," Gov. Tim Walz said.

Minnesota Department of Public Safety (DPS) Commissioner John Harrington said that he and other state law enforcement support the right for people to exercise their First Amendment rights to protest.

Harrington said DPS stands ready to protect the Constitution and the law and "a peaceful transition of power." He said law enforcement will protect the Capitol, the people's representatives, and the community.

"There are still no credible threats to the Minnesota State Capitol," Harrington said.

He said the FBI memos that are being widely cited in news reports are "pretty dated material."

"There is no credible, local, immediate threat in the state of Minnesota. That doesn't mean that there wasn't a threat back in December when that information was developed," he said. "We are turning over every rock and looking under every bush to see if there is anything else out there."

RELATED: 'No credible threats' to Minnesota Capitol but security to remain high through inauguration

Earlier in the week, DPS said while the State Capitol remains a safe place, state officials are asking residents who aren't working or doing business there to stay home. Among the measures being taken to guard against potentially violent activity include:

“We will continue to track and monitor reports of any individuals or groups that are not interested in a peaceful expression of their First Amendment rights so we can respond accordingly,” said Harrington said in a news release Thursday. “We have been working with our law enforcement partners to develop a coordinated and comprehensive plan to guard the Capitol and protect state employees, visitors and peaceful protestors from harm."