The move comes after national backlash over the decision to stop saying the pledge, including attention from President Donald Trump. 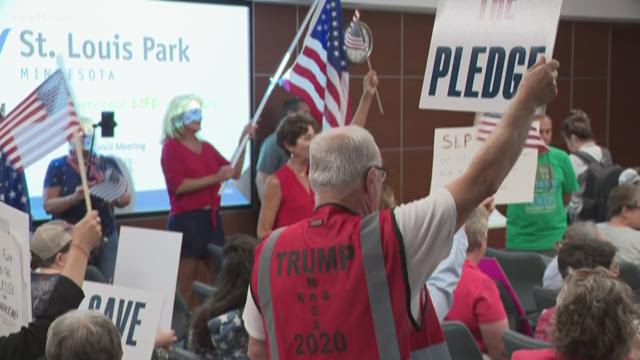 ST. LOUIS PARK, Minn. — The St. Louis Park City Council has voted unanimously to reinstate saying the Pledge of Allegiance at its meetings.

The move comes after national backlash over the decision to stop saying the pledge at the start of meetings, including attention from President Donald Trump. On Monday night, council members voted to bring the pledge back for regular meetings twice a month, citing a desire to move past the pledge controversy and focus on more important city business.

Similar to a council session held one week ago, the full council meeting on Monday night featured a jam-packed crowd. This time, protesters opposed to the council's decision were also met with counter-protesters who voiced their support for the council and the city of St. Louis Park.

On June 17, the council approved a resolution to drop the pledge by a 5-0 vote, with one council member and the mayor absent.

Anne Mavity, the Ward 2 council member in St. Louis Park, sponsored the change, saying the pledge doesn't reflect the city's diverse values and is not necessary.

"Not everyone who does business with the city or has a conversation is a citizen," Mavity told KARE 11 earlier this month. "They certainly don't need to come into city council chambers and pledge their allegiance to our country in order to tell us what their input is about a sidewalk in front of their home."

But the decision to drop the pledge prompted backlash from the community, and eventually even from the president. Trump tweeted about the controversy on July 9, saying, "Outrage is growing in the Great State of Minnesota where our Patriots are now having to fight for the right to say the Pledge of Allegiance."

Trump addressed it again in a tweet on July 11, saying, "The Pledge of Allegiance to our great Country, in St. Louis Park, Minnesota, is under siege."

At a St. Louis Park City Council meeting on July 15, the council voted unanimously, 7-0, to reinstate the pledge.

They issued a statement on Monday saying: