KARE 11 Investigates: COVID becomes a leading cause of death in Minnesota

Death rate in Minnesota is climbing compared to other states; state has higher per capita rate of COVID-19 deaths than neighboring states. 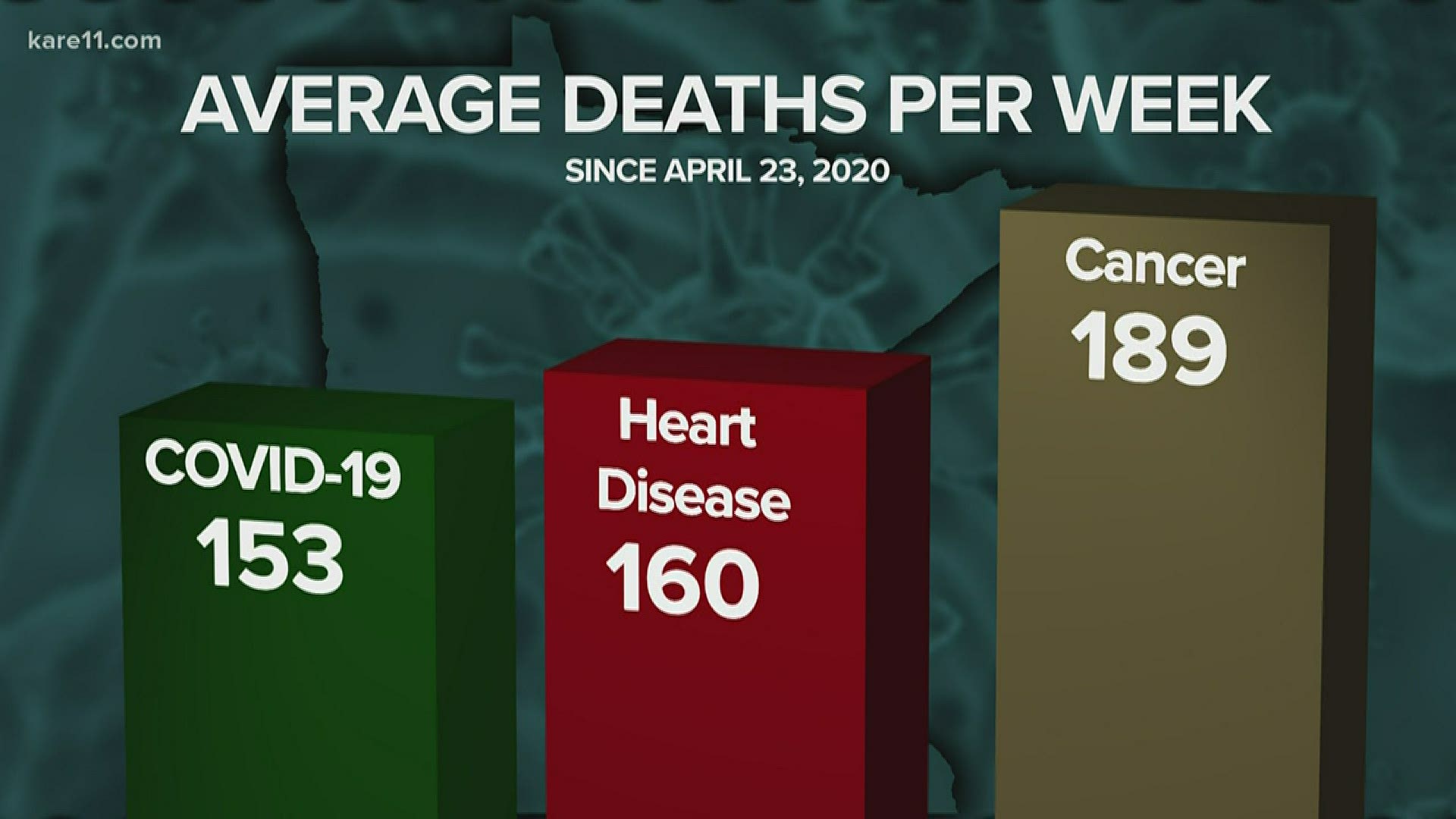 As more Minnesota businesses reopen and social distancing becomes more relaxed, COVID-19 has become one of the leading causes of death in the state, a KARE 11 analysis has found.

The number of weekly COVID deaths in Minnesota – an average of 153 over the last two weeks -- now only trails cancer and heart disease, according to a review of death records from the Centers for Disease Control and the State of Minnesota.

With the state reporting 30 COVID-related deaths on Wednesday, the highest single day total since the outbreak began, Minnesota now has more deaths from the disease per capita than any neighboring state.

Minnesota’s overall death rate compared to other states across the county is also on the rise.

Three weeks ago, Minnesota ranked 38th in the country in per-capita COVID-19 deaths. Today, the state ranks 22nd, ahead of other states thought to have had larger outbreaks, such as California, Florida and Texas.

“We’re clearly in the thick of it,” said Rob Warren, a University of Minnesota sociology professor and Director of the Minnesota Population Center. “It’s hard to tell if things are going to continue to grow. I think the best we can hope for is that things stay the same for awhile and then eventually go down.”

She said at the beginning of the outbreak, Minnesota concentrated its testing on more vulnerable populations in long-term care, which has resulted in more deaths classified as COVID-related.

She believes other states have been under-reported COVID deaths from long-term care.

“Other states, they have not had the same predominant focus on long-term care that we have had,” Ehresmann said. “We made long-term care our highest priority, and for a number of weeks that was almost exclusively where we were seeing cases identified.”

Driving Minnesota’s death toll is the swelling number of cases from nursing homes and assisted living facilities. As of Wednesday, nearly 84 percent of the state’s 485 deaths were of people living in long-term care, according to the state health department.

Nursing homes across the state have been devastated by COVID. Last week, St. Therese in New Hope reported 47 residents died from the virus. Less than a mile away, North Ridge Health and Rehabilitation Center has had at least 23 deaths, records show.

At least 10 residents of the Sauer Memorial Home in Winona have died, while nine people who had lived in the Wellstead home in Rogers have succumbed to the virus, according to records reviewed by KARE 11.