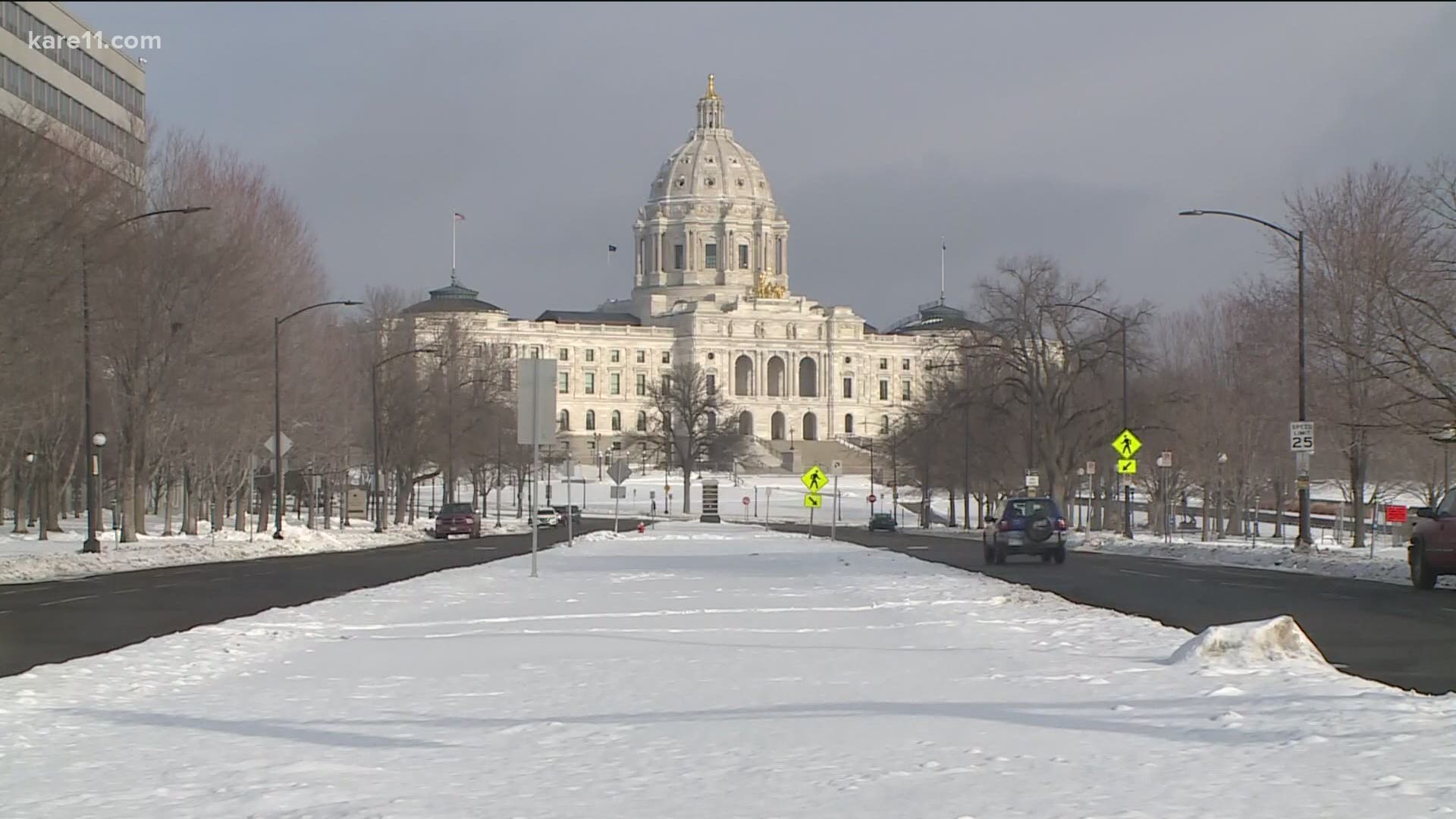 ST PAUL, Minn. — Minnesota lawmakers enter the 2021 Session with a lengthy to-do list, and there will be plenty to disagree about in the nation's only divided state legislature.

But in order to avoid a July state government shutdown the DFL-controlled House and GOP-controlled Senate must find a way to agree on balance the budget for the next two years.

The most recent economic forecast projected a $1.3 billion dollar shortfall for the two-year cycle that starts July 1, 2021. And, unlike the federal government, Minnesota can't begin the new biennium with a projected deficit.

"That means getting the budget done, and we have to get it done or the state shuts down. So that will be number one."

COVID-19 will dominate much of the what the discussion this session, and the pandemic will dictate that many of those discussions happen via Zoom instead of in-person. House Democrats say the legislature needs to focus on helping those who've been hardest hit by the coronavirus and the forced economic slump designed to slow the spread.

"We have seen the disease especially hit hard service workers, who are struggling to begin with in many cases, people of color, people from rural areas. Yes, we have to balance our budget. But the welfare and economic health and actual health of Minnesotans is more important than any one budget decision we make."

Sen. Gazelka said there's no enthusiasm in the Senate for some of the hot button issues that have gained support in the House in past years, including recreational marijuana, universal background checks for firearms and earned sick leave.

"We’re not trying to have a broad agenda because we have to work through this lingering COVID, where we’re not in person yet and we’re trying to do really important things and it just doesn’t all get done well with Zoom."

He said Capitol Republicans will resist any effort to resolve the deficit by raising new tax revenue. Democrats said all tools should be on the table when it comes to helping Minnesotans weather these unprecedented times.

House Democrats will attempt to pass an aid package for people who had their small businesses destroyed during the riots that followed George Floyd's death in police custody last Memorial Day.  That legislation, known as The Promise Act, passed the House during summer special session but never got traction in the Senate.

"In our best Minnesota tradition all of us should be coming together to help those immigrants, to help those communities who were hard hit and through no fault of their own," Rep. Winkler explained.

"We may have arguments about who is responsible, and why it happened, etcetera, but one thing for sure is the people whose homes and businesses were burned out were not at fault."

Senate Republicans will take another run at a voter ID bill, which would require valid ID to be shown at the polls in cast a ballot. The GOP put the voter photo ID on the ballot in 2012 as a proposed constitutional amendment, but it was voted down.

"There were really two amendments on the ballot that year and a vote no campaign," Sen. Gazelka remarked. "But we saw back then 75% of people thought it made sense you had to have a valid ID to vote, and we even provided the resources so that anyone who could afford an ID could get one."

In all seven special sessions throughout the summer Senate Republicans passed a resolution to strip Gov. Tim Walz of his emergency powers, insisting that he put the legislature in the driver's seat for planning the state's COVID-19 response. Republicans would prefer to see restrictions vary from community to community, rather than being applied evenly in all areas of the state.

But the DFL-controlled House fended off all such efforts, with the majority asserting Gov. Walz can respond to changes more quickly than a divided legislature can.

Rep. Winkler said he would entertain the notion of refining the scope of the governor's powers, but after the current crisis passes.

"I'm willing to have conversations about long-term issue on emergency powers, but we’re not going to put Minnesotans’ lives on the lines in order to have a legislative debate about separation of powers."

Walz's staff announced Monday night the governor will make an announcement on Wednesday loosening some of the restrictions on indoor dining in the state, something that has been off-limits since before Thanksgiving.