Lt. Bob Kroll said he spoke on the phone with Eric Trump on Tuesday and is arranging getting the president some of their "Cops for Trump" T-shirts. 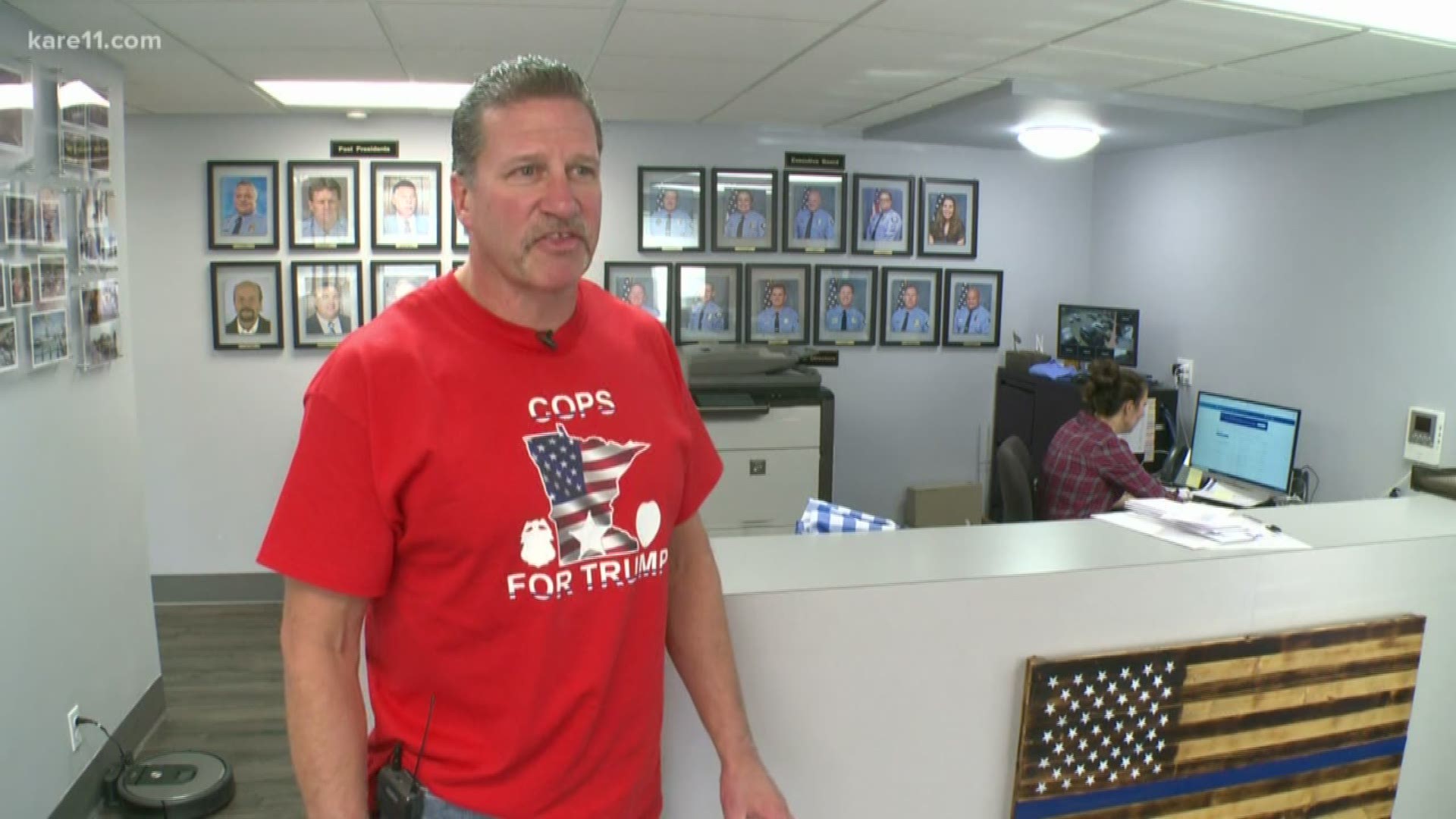 MINNEAPOLIS — "Cops for Trump" T-shirt sales from the Police Officers Federation of Minneapolis aren't slowing down ahead of the president's rally on Thursday. President Trump also showed his support for the shirts on his social media.

Tuesday afternoon a sign on the police union's door said "Out of shirts till 3 p.m."

Schmidt said their phone had been ringing all day, including international calls, and their website had crashed several times. Both officers and members of the public have been buying the shirt.

The $20 red "Cops for Trump" shirts were already selling fast Monday but then Tuesday morning Lt. Bob Kroll, head of the officers' union, appeared on Fox News talking about what prompted the shirts.

A new policy says off-duty Minneapolis police officers cannot wear their uniforms while they're endorsing a political party, candidate or campaign. Minneapolis Mayor Jacob Frey said the policy was in the works long before President Trump's planned visit this week.

"The Minneapolis Police Department is neither a Republican nor a Democrat entity. It is non-ideological nor is it partisan. It is a neutral entity that is charged with ensuring the public safety of every single resident in the city of Minneapolis," Frey said, during a press conference Tuesday afternoon.

Kroll and others have accused Mayor Frey of being politically motivated because officers have appeared as backdrops in events held in the past by Presidents Barack Obama and Bill Clinton. But KARE 11 political reporter John Croman points out that those events weren't political campaign rallies.

The president tweeted several times about the shirts after Kroll's TV appearance, mentioning, "Actually, I LOVE the Cops for Trump shirts. Want to bring some home. I am with you 100%!!!!"

"I was on the phone with his son, Eric, earlier today. I've been talking with staff throughout the week. We've got VIP tickets and I'm speaking at the pre-program. So yeah, we've made arrangements," Kroll said.

Kroll did not have an exact percentage but said a "small portion" of T-shirt sales will go toward the union's charities.

By noon on Tuesday they had sold 800 shirts and were waiting for 500 more later in the day. They also had ordered another 1,500. Kroll said right now they are giving priority to those attending the rally.

"We want as many red shirts down there for the president at the rally on Thursday as we can have," he said.

Karmen Post who lives in Uptown stopped by in the afternoon. They were out of shirts for the next few hours but Post ordered one for her and her son; they're both attending Thursday's rally.

"Oh it's awesome and just thought I'd take a chance and come on up and see if I could get one," Post said.

Kroll said the shirt will stay for sale on their website even after the rally.